HISTORY OF THE LIVERPOOL PRIVATEERS AND LETTERS OF MARQUE book review 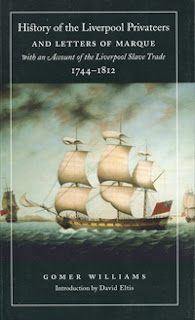 66044
Title: HISTORY OF THE LIVERPOOL PRIVATEERS AND LETTERS OF MARQUE
Author: GOMER WILLIAMS
First published in 1897, we here have a heavyweight facsimile reprint in paperback which incorporates an Account of the Liverpool Slave Trade, 1744-1812, and an introduction by David Ealtis. It is the most detailed period document on privateering and the slave trade. The first half of the book covers historically important eras such as the Seven Years' War, the American War of Independence and the French Revolution. The second half focuses on the slave trade and how privateers profited from it, including extensive chapters on specific captains, the abolition movement and corporate ties to the slave trade. Gomer Williams presents material on Liverpool drawing from newspapers and private correspondence including numerous stories about slave traffic. Written at the end of the 19th century, Williams lamented that slave traders still threatened Africans. In his time however slave trading was considered a legitimate endeavour under both domestic and emerging international law, no different from any other form of trade, and privateers took good advantage of the profits to be made. The 2004 introduction is by David Ealtis, Professor of History at Emory University. In it he says 'The slave trade to West Africa had eventually been replaced by traffic in palm oil and palm kernels, centred on Liverpool, whose eventual value greatly exceeded what West Africa's slave trade had generated. A Gomer Williams was employed on a Liverpool palm oil vessel trading at Old Calabar in the mid 19th century… Williams was not born until 1874 and spent his working life as an author, publisher, journalist, advertiser and then 'bookkeeper', rather than as a sailor or merchant. Today we would call him a journalist and we are thankful for the depth of his research in bringing this fascinating period of history alive once again. 718pp in heavyweight paperback with three gatefold pages of facsimile documents, one entitled 'Palace and Stockade of an African King Who Dealt in Slaves'. With fascinating appendices on food that slaves were given, lists of ship's name, master's name, voyage and by whom carried out plus index to names.

Email ThisBlogThis!Share to TwitterShare to FacebookShare to Pinterest
Labels: BOOK REVIEW, GOMER WILLIAMS, HISTORY OF THE LIVERPOOL PRIVATEERS AND LETTERS OF MARQUE