Two Book Reviews for the Curious

130,000 new titles have been published in the UK last year and already Bibliophile has been invited by many publishers to help them reduce their book stocks. This is how we have for over 30 years been able to pass on such fantastic savings on quality hardbacks and paperbacks to our loyal customers.

Here are two interesting reads for the curious: 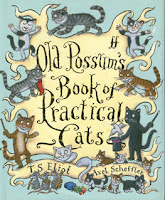 OLD POSSUM'S BOOK OF PRACTICAL CATS
When she began as a bookseller back in 1985 in St. Martin's Lane bookshop, our Annie sold at least 100 copies of this book every week, so it is most fondly remembered. That was just the cheap and cheerful Faber paperback. What we have here is a very splendid Faber hardback with beautiful colour illustrations by Axel Scheffler in what must become a collectable edition. Cats! Some are sane, some are mad, and some are good and some are bad. Meet magical Mr Mistoffelees, sleepy Old Deuteronomy and curious Rum Tum Tugger. But you will be lucky to meet master criminal Macavity because Macavity's not there! A beautiful edition of these beloved cat poems which of course were subsequently turned into the musical Cats. First published 1939, new edition with additional poem 1953. 64 large pages. Published Price: £14.99 BIBLIOPHILE PRICE: £6

Volume one, number one of the Burlington Magazine appeared in March 1903, produced from the now seat of the Royal Academy and the Society of Antiquaries. It was the headquarters of the Burlington Fine Arts Club whose exhibitions of Old Masters paintings from British private collections had long attracted the admiring attention of International connoisseurs. The aims of the new Magazine were to set the study of art history in Britain on an entirely new footing, including art of all periods and places, decorative as well as fine art, with high standards of typographical design and illustration and above all, readability. The aims did not change over the next 100 years. Michael Levey has compiled some of the most significant articles, reviews, editorials and obituaries to appear in it under successive editors during the 20th century. Here is W. M. Rossetti on Dante Rossetti and Elizabeth Siddal, an editorial on Clifford's Inn and the protection of ancient buildings, André Salmon on negro art, Augustus John on Gwendolyn John, Sir Kenneth Clark on Piero della Francesca's Saint Augustine altarpiece, a 1998 article on the Raphael Tapestry Cartoons re-examined, Malevich and film and much more. 256 very large pages with hundreds of colour and b/w plates. Yale University Press first edition, 2003. Published Price: £35.00 BIBLIOPHILE PRICE: £18.50
Posted by Bibliophile Books at 16:04