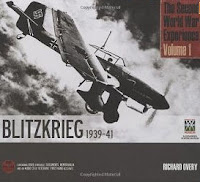 66378
Title: SECOND WORLD WAR EXPERIENCE: Vol. 1 Blitzkrieg 1939-41
Author: RICHARD OVERY
Published in association with the Imperial War Museum, this outsized slipcased box set contains rare removable documents, memorabilia and an audio CD of veterans' first-hand accounts. It is a companion to second volume Axis Ascendant code 66379. We are presenting the first two in the landmark four part history of the Second World War. Blitzkrieg examines the slow build-up as the world moved towards war and goes on to document the Munich crisis in 1938 to the defeat of France, from the retreat at Dunkirk to the sinking of the Bismarck. Among the rare documents are propaganda, operational maps, personal letters, secret orders and war diaries is a fake passport used by sub-lieutenant Heinz Kummer of the Graf Spee to flee back to Germany following the Battle of the River Plate. Here is Field Marshal Montgomery's personal diary charting the events of the Dunkirk evacuations, Churchill's annotated notes for his famous June 1940 speech 'This was their finest hour' and the complete plan of attack for the German invasion of the UK - 'Operation Sealion', including General Halder's order to invasion forces and the operational maps. Transparent wallets contain superbly reproduced facsimiles in colour including a foldout poster entitled 'The World's Verdict on Germany' . There are collectable documents, flaps, letters inserted inside envelopes with ink handwriting in a masterpiece of publishing to the highest of standards. 64 very large pages in slipcase.